Since the early days of computers, binary has been a simple way of communicating between the biological and digital worlds. Relays represented the 1s and 0s that talked to the ancestors of today's laptops, and even though computers have gotten smaller, they still function using this very basic principle.

Most computers run large data sets using hexadecimal code (a base-16 number system) to speed up data transfer, but on the occasion you need to convert between binary (base-2) and decimal (base-10) numbers, this handy widget will help speed things along.

A button beneath both sentences will allow you to erase all data from both fields to start fresh.

The following chart may be a little easier to follow, remembering that any number to the power of 0 is represented as 1.

Binary numbers can be understood exactly the same way as decimal numbers, except each space is a power of 2 rather than a power of 10 and each space can only have a value of 0 or 1 (rather than any number 0 to 9).

Converting the binary number 11001010111 to decimal form would take a few short steps.

Notice the same number in decimal form only takes four places, compared to the eleven places taken up by the binary number. This can make decimal numbers more advantageous when doing simple calculations. 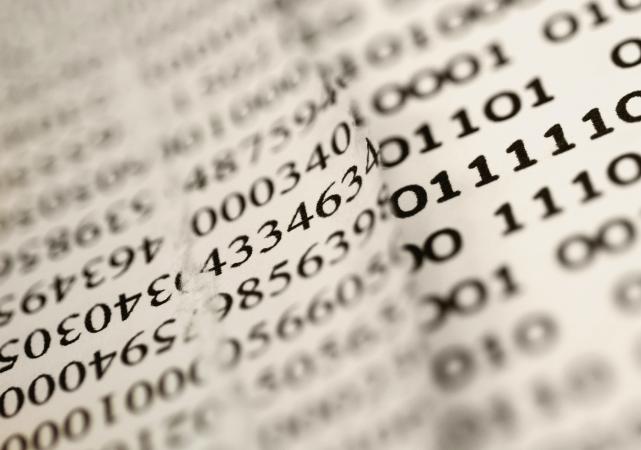 While the concept isn't too difficult, you will need a pen and paper to keep track of this conversion.

The last remainder drops into the furthest left placeholder , resulting in the final binary number of 11001010111.

ENIAC, one of the first computers, was built in the mid-1940s to necessitate military needs. Ms. Bilas and Ms. Jennings helped design the massive machine with 18,000 vacuum tubes to represent bits. Since eight bits represent one byte, that was equivalent to 2.25 kilobytes of memory!

That may not sound like much compared to today's terabyte hard drives, but it was huge for the time. Air handling and filtration systems were still in their infancy so debugging the computer meant exactly that: removing bugs from the circuits.

You may not encounter binary numbers of a frequent basis, but binary numbers are all around you, from the colors on this website to these words you are reading. This handy widget will make it easy to convert binary numbers to and from decimal numbers with just a couple clicks.