A day on a standard clock moves in two 12-hour sections, while the military time clock marches in a single 24-hour block. When you have the need, our time conversion widget can quickly help you make the shift from one system to the other.

How to Use the Widget

The widget helps you figure out the equivalent of times on the standard 12-hour clock to those of the 24-hour military clock, as well as the reverse.

To convert from standard time to military time:

In the first line of the widget:

To go from military time to standard time:

In the second line of the widget:

To delete your entries for any calculation, click the "Clear" button.

In standard time, the 12-hour clock runs from 12 AM midnight to 12 PM noon, and repeats another 12 hour cycle to the midnight hour of that day.

On the other hand, after 12 noon, the 24-hour military time clock continues to count the total hours after midnight, from 1300 (thirteen hundred) hours to 2359 (twenty-three fifty-nine), before cycling through to 0000 midnight the next day. The military times of 1300 and 2359 are equivalent to 1:00 PM and 11:59 PM, respectively, as expressed in standard time.

The Uses of Standard and Military Time

The 24-hour clock is also used for other official purposes around the world. These situations include use by hospital and emergency medical personnel, as well as by the airline industry to record the time of events.

The Writing Format of the Two Clocks

For both clocks, be careful to understand how to write the times of day in their proper formats. 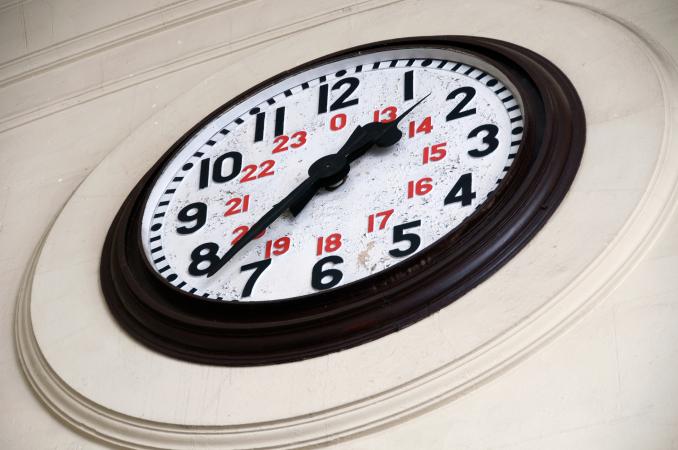 For the standard 12-hour clock:

For example, you would write one minute past two o'clock in the morning as 2:01 AM.

For the military 24-hour clock:

Once you get the gist of it, it is easy to understand how 24-hour military time relates to 12-hour standard time. Use our simple widget when you want to make a quick conversion from one time clock to the other.